I downloaded and installed the Nikon software, and it claims there is no card in the camera. However, it can read the camera's internal memory, and the camera on its own can partially access the memory card, so I can sort of get to my photos by copying a few at a time to the camera's small internal storage. It crashes every time I try to browse to the second oldest photo now - before, it seemed random if it would crash at all, and I could even look through all of them unhindered.

And then, of course, the batteries died, so I can't do more recovery right now. I am of course lazy about dumping the memory card, so there are 156 photos on it. Blargh!

Anyway, the moose photos have been recovered. This one turned out best: 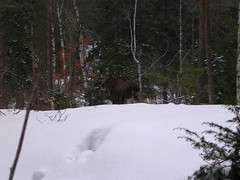 In other woe news, today was mainly wasted. I didn't sleep at all, until after dawn, upon which I slept away most of the day, naturally interrupted because of our evil neighbors who are STILL renovating their house. Hasn't it been a year now?

A bit of knitting progress. The tentatively named "Failure Sock" looks like it might actually fit me! So far it's just a tube, so I haven't ventured into unknown territory yet.. even if I do successfully knit a sock, I doubt I can make a matching one. Sock knitting intimidates me. Hats are so much easier.

In non-woe news, my grandparents deposited 1000 kroner into my bank account as a late birthday present. That solves the problem of how I'm going to afford to buy myself prizes for accomplishing things - now I just have to earn them.

I have come up with the following plan: If I can empty the clutterbox before the end of March, I get Planetes boxed set. If I go to work for a week, on time, I get volume 2 of the Welcome to the NHK manga. If I walk 10000 or more steps per day [the recommended daily amount, which I have achieved like three times since getting the pedometer for giftmas] every day for three weeks, I get to buy myself a bamboo T-shirt and some yarn.

The clutterbox is a big box I have stashed some of the clutter of my room in. The rules are simple: Anything I take out of it will be either put in the trash, or where it belongs, which is not somewhere I'll just move it away from again when I clean out that area. Frankly, I doubt I will make the deadline.

And more woe, just in - tapping the touchpad no longer leftclicks. I noticed it earlier today but dismissed it as a quirk, now I can see it's still an issue, and I have rebooted recently (for different reasons). Might have been caused by Odessa stepping on some key combination.. she messed up one of my turns in SMAC:SMAC last night.
Collapse