I don't like who I am when I'm here. I have so much hate and anger in me. So much disgust. The vile one is apparently living here full-time now, and the kitchen is disgusting. Yesterday he had emptied his ashtray in the trash and just left it there. Frankly the house stinks.

I had a brief respite yesterday [Friday] when I took out the trash - a girl with a kitten came by and asked me if it was my cat. Apparently it was following her around and chasing her dog. She asked me if I could take care of it for a while, and I was pleased to have the company. So for a few hours, I had a playful little boy cat running around in the house. I gave him some food, and some of Odessa's toys, which he adored. Unfortunately I had to go to the store to buy more eggs, because the vile one had stolen them, again, and while the kitty followed me most of the way, he got scared of traffic and eventually ran off. He wasn't there when I came back. I didn't want to leave him inside lest he pee on something, as I didn't know if he was housetrained. Surely such a friendly, playful kitten belongs somewhere.. I never intended to keep him anyway. 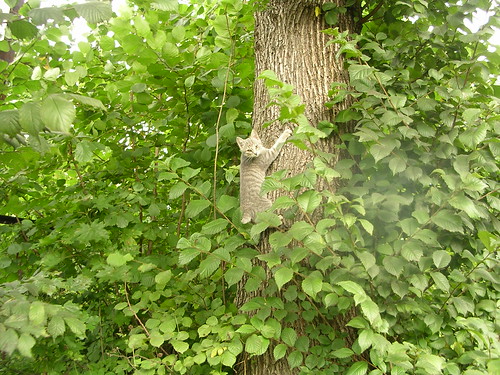 Isn't he just the cutest thing?

Facebook claims it will verify international users now, but I'm not receiving the SMS with my code, and it has been several hours. Do they send out messages only once a day or something?

on Chore Wars, I am nearly at my first level up. It's quite fun, except that one time the monster defeated me and took its treasure with it. I wanted that! I still haven't -killed- any monsters, they just run away when they are low on HP.
Collapse