The friendsfriends page is still my favorite paid account feature. Thanks to friendsfriends, I have met several interesting people, been linked to loads of shiny things, for example this (Not Worksafe) hilarious review of a romance book or this post on social retardation. And a pattern that looks easy and fun to knit.


WTF, Kinder Surprise? I bought a three-pack today, because those plastic capsules are just perfect for crafting cat toys, and ALL THREE "surprises" had zero assembly required. Come on! Back when I was a kid, I loved kinder eggs because it was fun to build things, and as we got older, we took pride in being able to assemble toys without looking at the instructions. Maybe pre-assembled crap and one-piece figurines are what today's kids want, and if that is so, isn't it about time someone made Adult Surprise eggs? With dark chocolate instead of milk/white, perhaps?

My sister's wedding last week was, to me, a disaster. I really did not enjoy it. Very few people there I knew. Most of them mormons. No one spouted their judgmental crap on me, and I was able to make tea after the kitchen wasn't as busy. It was just so noisy (lots of kids running around) and religious. I was already drained the night before; I couldn't take it being around other people. Only Aniki noticed that I was crying during the dinner. He was seated opposite me, but I had strangers to the right and left of me. Just a few changes to the seating arrangements would have made me so much more comfortable. Sigrid's friend Elisabeth, for instance, would be much nicer to sit next to because I know of her and she's not a mormon. She was nearby. Also Lise B, who is a mormon, but a friend of the family and very nice, wouldn't have violated my personal space. After the dinner I snuck off into the chapel and played with my DS and knitted four cat toys (ran out of yarn or there'd have been more).

For my own sake, I shouldn't have come, but I think it meant a lot to my sister, so I don't regret going.

Finally stashed (on Ravelry) all the yarn from my insane shopping trip to Bergen (just before the trip to Sweden). Still have loads of yarn that I haven't added to the site yet, but I'll get around to it eventually. I think I'll wait for a day with great lighting conditions before photographing more of my yarns.

And just now, I got to see Odessa catch, kill and eat a mouse. I saw her hunting in the garden; after patiently waiting for the mouse to reveal its location, she sprang into action and closed her jaws over the unfortunate rodent. I ran to the window to call her over, and the mouse was already dead when she dropped it into my hands. Then she took it back and carried it into the living room where she ate it. So now I know how she hunts, and if I see her like that again, I will grab my camera and start filming. That poor mouse didn't stand a chance!

I saw my doctor on Friday (the 13th), talked lots, finally submitted my application for disability pension (filled out the night in advance, at last, and it wasn't so hard when I did it section by section, leaving the hard stuff for last). The (school) bus ride to Eivindvik was tortuous. My doctor and I both agreed I should take a taxi back home, so I got to do that for just the co-pay of 125 kroner. (Normal price is ~500). Doctor and I also discussed my psychiatric treatment (and lack thereof). I want to do group therapy again, but I'm going to have to travel kind of far for that. Either Førde or Knarvik. We also talked a lot about how the state of my home (clutter, etc) is negatively affecting me, and the possibility of getting help with that. I'm now having a psychiatric nurse come over to my place on Wednesday. Going to have to refresh the litterbox and wash the bathroom sink first; those two are the main embarrassing factors. Did a fair amount of housework today, more tomorrow.

In knitting, I'm working on a cell phone pouch for my grandmother. I think it's turning out a bit too big, but if I stretch it just a little bit I can fit my Nintendo DS lite in it. I should finish it tomorrow or so.

And beer.. on my great shopping day in Oslo, I stopped by Ultra, a grocery store known for its huge selection (why don't we have any in the Bergen area?!), and found this beer I just couldn't resist. 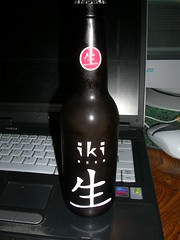 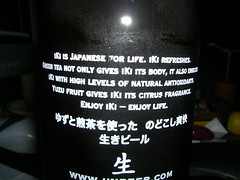 A beer with green tea!!

No, I haven't tried it yet. Will report when I do.
Collapse