It's not always easy to understand the cat. Recently, she has taken to sleeping on my bed most of the day, rarely coming into the living room if not to eat. I've missed her company.

Yesterday I cleared the clutter off the top of her cardboard box in the living room, and showed her by putting her there - she stayed for a nap. And has returned several times. Yay, finally we are spending more time together! All I needed was to give her an appropriate surface to lie on. 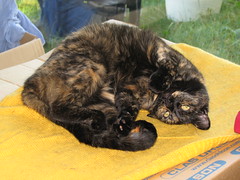 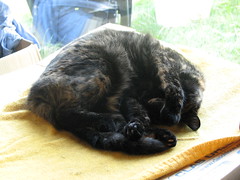 Cyberstalking
Do you keep tabs on ex-boyfriends and -girlfriends over social networking sites? Do you think it's emotionally healthy or dangerous? Amusing or painful?
Reply 349

Me of the past would have, if they had an online presence. Not so much out of an interest in him as because she was kind of into cyberstalking back then.
I don't have any kind of contact with the ex, except that he lives in the apartment complex right next to the one where my dad lives, so if dad runs into him, he's liable to tell me about it. I admit I felt a bit of schadenfreude when I heard he was married with a kid and a second on the way. Sometimes - very rarely - I wonder if he thinks of me as "the one who got away."

Keeping in touch with an ex you parted with on amicable terms could be healthy. My breakup wasn't that kind.

The relationship was already dead; he just waited for me to be the one to break up, claiming it was to protect me from the pain of being dumped, but I suspect he simply did not care. Living together was simply a convenience to the both of us. I had someplace to live, he didn't have to do all the cooking and cleaning by himself. Near the end, we were more like roommates, and I felt a little better after I moved into the other room to sleep on the couch every night. When he was gone on vacation and I realized after a couple of days that I felt relieved that he wasn't around, I finally admitted to myself that there could be no other option than to break up.

There can be no value in me cyber-stalking him, other than to laugh at his misfortune, and that I do not need. I am better off now, and whether he is better or worse off.. simply does not interest me very much.

Now, if I had an ex I still liked, the issue might be different...

I couldn't sleep last night. I laid awake until around 4 AM, I think, at which point I knew there was no way I'd be up and ready for the bus at 8. I was not following my grandparents to Eivindvik today. Instead, I caught the school bus on its return trip to Brekke, where for once it did not rain. As usual, I was the only passenger on the bus. It was quite beautiful at Brekke today, yet I only briefly wished I had brought the camera. I'd have enough to carry on the way back.

I spent an hour or so just sitting by the fjord, drinking tea, reading, or just looking at the little fishies among the kelp. Then I went grocery shopping. After I had gathered all the stuff I was willing to carry, I made the mistake of checking out the yarn corner. I ended up buying seven skeins of yarn, because I was tempted. All sock yarn. More Regia and Idena Crazy, and a new sock yarn from Sandnes called Palett, which looks suspiciously like Noro Kureyon Sock. Photos will be up on Flickr/Ravelry within a few days, I think.

I finished my shopping at 17:59, a minute before the store's closing time. Then I had 40 minutes to wait for the bus. I spent the time re-packing the cooling bag so everything fit, shifting the contents of the backpack so I could strap on the cooler, reading, drinking tea, and spinning (I had brought my smallest spindle and a bit of bluefaced leicester).

On the bus back, there was one other passenger, whom I could not place, but who apparently knew me somewhat. We talked a little. The bus ride was about half an hour, and it was starting to get dark. I started walking home with my heavy burden (23 kg, I found out when I got home). After the first car had passed, I regretted not sticking my thumb out. It is not uncommon for someone to stop and offer me a ride while I'm walking there, but I'm a bit reluctant to actually ask someone for a ride. It's always people who know me who stop (though I usually don't know who they are because I am horrible at facial recognition and remembering people), so I guess my chance of getting a ride home is lower after dark. I ended up walking the entire way home. Two more cars passed by the direction I was going, but I didn't quite feel right trying to hitch a ride when I didn't know who it was. Now that it's all over, I'm glad I walked all the way, because the exercise probably did me some good.

At the very last segment, I took out my pocket LED flashlight, whose normally feeble light helped a great deal. It was pretty dark.

Shoulders are sore, I should probably take more frequent trips so I won't have to carry as much each time. Plus I get half off on public transportation since I'm on disability. That's pretty sweet.

A major advantage of taking the bus to Brekke instead of Eivindvik is that I don't have to share the bus with rude and noisy kids. And I can do it in the afternoon and not have to be up early. Only downside is that I have to walk back from Rutledal, which I wouldn't consider a drawback at all if I wasn't carrying groceries. It's a nice enough walk. Not too long, if unencumbered.

This Saturday, the Library Boat "Epos" will be docking at Brosvika. That's pretty much the biggest cultural event that ever happens here. I hope the weather will be better than the last three times, so I can finally get some good photos of everyone's favorite library.
Collapse