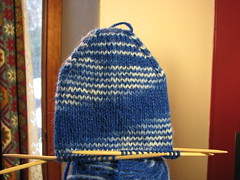 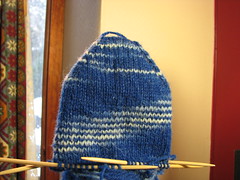 Blue Doom has been coming along nicely so far. I've hit a snag because I have no idea how to prepare for the heel in a toe-up sock, but I'll try to learn sometime in the near future. I am very pleased with the pattern that is emerging. I can't have extended knitting sessions with this project because of how coarse the yarn is, and that's okay. I prefer to advance slowly when I'm in unfamiliar terrain.

In other knitting news, I finished the Diagonal Lace Scarf I was working on a few days ago, and have now blocked it, but I don't really see a difference between before and after blocking. Maybe it'll just keep its shape better now. The stupid mohair/acrylic yarn itches a lot, though, so I probably won't wear the scarf much. But it's pretty.
I have also given the kitty pi I knitted a while ago a round of felting in the laundry; it shrunk a bit, but doesn't look felted at all. I think it needs three more runs.

In non-knitting news, I am fine. Yoki has developed an annoying fan noise, probably in the PSU, and it persists, making it necessary for me to close the bedroom door to sleep, which annoys the cat as she likes to have the door open. I'll try to shut him down and give him a thorough air dusting soon, but right now he has an uptime of 49 days and I think that's approaching a new record.

The cat is not too well. She threw up again today. And it's frustrating to not be able to do anything for her. At the very least, I'm going to have to wait until Monday to be able to take her to the vet again.. but chances are they won't be able to fully fix the problem (like last time), and it'd still cost me a good deal of money.
Collapse