I have so many things I want to do, but not enough money, time and energy to do it all. Actually, I have plenty of time now (except I spend a lot of it sleeping), and while I'm by no means rich, my economy is comfortable. For most things, it is the energy I lack.

I want to grow food in my garden. I have outdoor spaces that I am free to do mostly whatever I want to in. It feels like a waste if I don't. It's pretty small scale; it'll only give me a few extra meals, except maybe for potatoes if I plant lots of those. I'm thinking of going with potatoes, white beets and green beans this year. I probably have seeds for another half a dozen more edibles, but when I try to do everything, it all just falls to pieces. I should just focus on a few.

Then there's all my fiber hobbies - knitting, spinning, dyeing. I haven't done any spinning for months now. I enjoy spinning, but it requires a bit of concentration. I can't spin while watching TV, for instance, like I can do while knitting. And I still haven't learned to spin on a wheel.
Knitting is progressing.. though I've knit nothing but socks recently. I have so much sock yarn, I shouldn't need to buy more for years.. but I know it'll only be a few months at the most until I cave in and buy more.

As for dyeing, I just received, gratis, some old pans that are just perfect for dyeing yarn in. Old, big, aluminum, worn, the stuff you wouldn't want to cook food in, but they're too nice to just throw away. So I'll try to dye some more yarn on the first available day where the weather is too unpleasant to work on the garden. The garden is more time-sensitive. I already have hand-dyed yarn for five pairs of socks, just waiting to be used.

Odessa is also enjoying the spring. She's outside a lot, hunting or playing, but her kill count hasn't risen beyond her earlier one mouse and one shrew. I often see her jump after flying insects. I'm glad she's having fun. 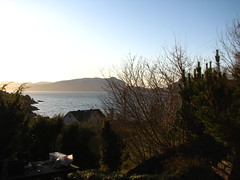