As many of you know, I live here and the only bus we get is the school bus. Thus I am without transportation for the duration of summer vacation.

Thankfully, it's only 3 km to the ferry lane at Rutledal, which is occasionally graced by a bus or two, and has a ferry running to the other side of the fjord (Rysjedalsvika).

So I asked the route finder at Fjord1 how to get myself from Rutledal to Eivindvik.

And it told me to take the ferry to Rysjedalsvika, the boat to Sollibotn, and from there a bus to Eivindvik.
Let me illustrate: (map taken from google maps and doodled on in GIMP because I stopped pirating software and therefore don't have Photoshop oh how I miss photoshop)( Collapse )

...yeah. Normal route would be along the dotted red line, then south on the main road to Nordgulen, where the bus turns westwards and mostly follows the coast, past Flolid to Eivindvik - a 30-minute drive. This proposed route takes three times as long.

I might as well go to Førde to do my groceries.. Either way I'd have no hope of bringing foods that require refrigeration home before they spoil.

For some reason I was up early today. Around 6:30 I think, having gone to bed right around midnight last night.

Today started out overcast, then it rained quite a bit, and lastly it cleared up and turned into one of those wonderful summer days I had a lot of in my childhood. So I packed my backpack and went to the lake (it's only a 25-minute walk), and had my first swim of the year. A bit cold, but lovely and refreshing. It surprised me how tired I felt when I made it out to the island. I made sure to "warm up" first, though, and maybe most importantly confirming that yes, I do remember how to float. To float is something I learned several years after first learning to swim, and it opened up so many possibilities. No longer did I have to make it to land before being exhausted; I could just lie on my back and not sink.

After resting a while, I swam back. Had a moderately alarming moment when I got some water up my nose while floating. Lesson learned: Keep your head towards the oncoming waves. I was also in some discomfort due to water in my ears, also exacerbated by strong winds. I went back on land and draped the towel around my head to shield my ears, and after a while I was fine again. I drank some tea and read a good chunk of the current book (which happens to be Terry Pratchett's Soul Music). I find I get a lot more reading done when I'm out by the lake. No distractions. I was also the only person there, so I lounged around naked, letting the sun and wind dry me off. It was just the right temperature for such things. After I put clothes back on, I took out the camera and snapped some photos of the two carnivorous plants that grow by the lake.. 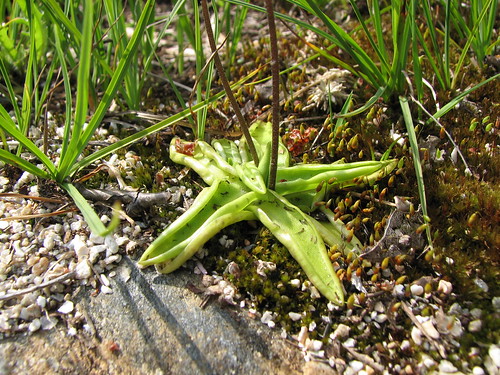 and some kind of Drosera: 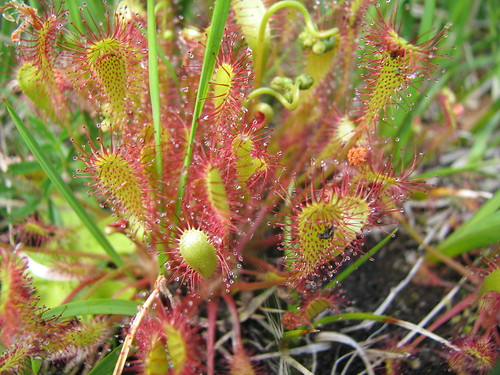 And that's about it. Walked home, had dinner, am about to waste the rest of the day playing XCOM: Terror from the Deep. My team is raiding Alien Colony-2 at the moment. I love vibroblades. It's so satisfying to just walk up to an alien and STAB IT. Also saves me on ammunition, heh.
Collapse