So, I haven't posted to LJ since easter.

What has happened since then? ::looks at calendar::

Not much. We've recently taken up roleplaying again, playtesting a homebrew system (Perky). I have mixed feelings about it. I've enjoyed playing so far, but translating an established character into the new system means giving up things that matter to me. Converting Danica wasn't too bad; things lost were things every character loses, like most defense modes.

I've been seeing my new therapist about once every three weeks. So far it hasn't been terribly useful to me, and the long trip to Førde is very stressful. I particularly hate the part where I run out of tea before I even start on the return trip. The last two times, I've counteracted that problem by bringing TWO thermoses with tea. Which adds bulk and weight to my baggage.

On one such return trip, I failed to get my aunt's attention to ask for a ride home from the ferry lane, and had to walk, about two miles carrying around sixty pounds of stuff. At the end of a long and tiring day. I was exhausted, but I did the only thing I could: put on Blue Stahli's Antisleep Vol. 2 on my iAudio7, accessing hidden reserves of energy.

Those hidden reserves of energy you aren't supposed to use because they are there to keep you healthy. The next day I had a sore throat. I wasn't sure if I was having a cold or allergies. One night I barely got any sleep at all, because lying horizontally made my throat close up. I managed to awkwardly prop myself up with pillows to retain the ability to breathe. All in all, I was sick for about a week. Even my old ear infection came out to play. I was miserable.

So yeah, fears I have about overexerting myself? Those are legit.

June was not a good month for knitting. I was barely able to keep up with my socks-of-the-month commitment by casting on some quick ribbed socks with about a week to go. Also my measurements were a bit off, and I rounded down when I should have rounded up and I didn't account for the effect of ribbing, and ended up with a pair of socks I can barely get onto my feet.

I have a tumblr, by the way. Same username. I've been posting to it some. There are a lot of things I like about tumblr, but there's still a great deal I don't understand, and the user interface is rather confusing.

Oh, and kittens. Calico-kitty keeps visiting me, and finally let me pet her. That's when I noticed she was pregnant. Though I gained more of her trust day by day, she opted to not have her kittens close to the reliable source of food.

Today I saw the kittens for the first time. I was sure she had lost them, that she'd have brought them around by now if they were still alive.
Of course the kittens are feral and I can't get near them, and Calico-kitty growls at me when I approach. But I did manage to get them some food and CatMilk (pretty sure it's just ultrapasteurized cow's milk with the lactose removed), and although the mother cat ate/drank most of it, I did get to watch the kittens eat some, from the window. 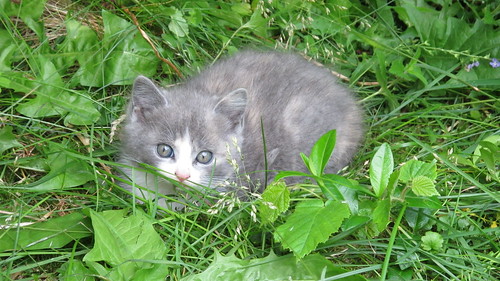 Lastly, I'm being really overwhelmed by Twitter/Tumblr/everything. Not long ago I installed a Firefox extension to display the number of open tabs. I had 308. Over the course of a week or so, I managed to get it down to around 200, but it's back up to 280 again. All of these articles I want to read, but don't really have the time to.

I haven't played XCOM much, having reverted back to Skyrim. I want to continue with my Let's Play attempt, but.. I worry that I'll keep failing and I will have wasted people's time with Classic Ironman attempts that never go anywhere.

I crave attention. In many ways, a "good day" is a day people talk to me or in some way let me know that they appreciate me being here. Someone liking one of my posts on tumblr or retweeting one of my tweets pretty much makes my day. That's probably not very healthy.. I'm basically linking my sense of self worth to being appreciated by others.

Mom is currently here on summer vacation. She's leaving again on Sunday. A few days ago we went on an epic shopping trip to Åsane, and now, at the age of 33, I finally own a bra that's my actual size. Two, actually. I would have bought four if they weren't so expensive. Between that and several other stores, and other purchases that have happened recently, I've spent about a month's pay in the span of a week.

And it doesn't even faze me, because I just got my tax return and prior to this shopping trip, I hit a new high score in my online bank.

I may have forgotten to check LJ at some point too, because I see my friends page only goes back two pages and the oldest visible entry is one I had not seen before. So if you've posted something further back than two weeks that was important, let me know. Though, there's like four people still using LJ apparently.

I really need to cast on my July socks because I'm really missing the de-stressing effect of knitting. I've done a gauge swatch, but I haven't settled on a pattern.
Collapse